Canada immigration news: Saskatchewan’s unemployment rate is being driven down by jobs created in a booming export market, as the Prairie province recovers from the COVID-19 pandemic.

“As the global economy recovers, Saskatchewan is leading the nation in increasing our exports to foreign markets,” boasted Saskatchewan Premier Scott Moe in a tweet last month. “We have a plan for a strong economic recovery, and we’ll continue to advocate for our wealth-generating exports.

“We have the food, fuel and fertilizer the world needs!”

The premier’s optimistic outlook is based on a Statistics Canada report that shows the province’s exports rose by 19.1 per cent on a seasonally-adjusted basis from September 2019 to the same month last year.

In October last year, the province’s unemployment rate dipped to the lowest level of any province in Canada, falling to just 6.4 per cent.

In late September this year, those rising COVID-19 case counts prompted TD Economics to downgrade their previously-rosy outlook for the province.

“Like its neighbour to the west, Saskatchewan’s outlook has recently taken a turn for the worse,” wrote TD Economists economists Beata Caranci, Derek Burleton, Rishi Sondhi, and Omar Abdelrahman in their latest provincial outlook.

“Daily per capita caseloads are at their highest level since the start of the pandemic, and first dose vaccination rates are the lowest in the country. As a result, the recoveries in Saskatchewan’s employment and consumer spending are more susceptible to downside risks stemming from the fourth wave.” 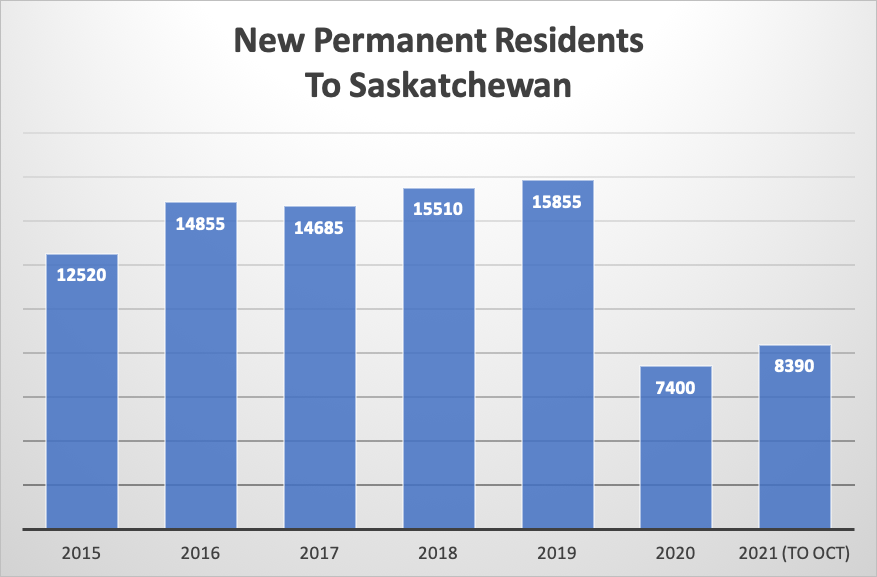 Despite that latest wave of COVID-19, the economists still forecast the province’s economy will have grown by four per cent by the end of this year and see a further 3.4 per cent growth to its real GDP in 2022.

Since TD Economics issued its forecast, the number of new daily cases of COVID-19 in the province has also dropped dramatically, falling to an average of only 67 new cases per day by the end of the first week of December.

Saskatchewan’s unemployment rate fell to a mere 5.2 per cent in November this year. That month, the province added 5,500 full-time jobs.

The booming Saskatchewan economy means many employers are scrambling to find workers.

Labour Shortages In Many Sectors Of Saskatchewan Economy

The district manager of Urban Cellars Beer Spirits & Wine Stores in Saskatoon, Sherry Halvorson, has reportedly said her operation – and other businesses – are very short-staffed.

“Business owners, business management in the area … they’re all struggling for help. It doesn’t matter whether they’re restaurants, whether they’re grocery stores,” she reportedly said. “The bank is lined up right out the door. They need bank tellers.

“It’s the fact of life. We need to get people back to work.”

That means many jobs are going begging and offering up excellent opportunities for foreign nationals who want to become permanent residents of Canada through economic immigration programs.

Those programs typically account for more than three quarters of new permanent residents to Saskatchewan.

In 2019, the last full year before the arrival of the COVID-19 pandemic in Canada, economic immigration programs accounted for 76.6 per cent of all new permanent residents to the province.

During the pandemic, the overall number of immigrants coming to make Saskatchewan their home dropped dramatically but the percentage of those coming under economic immigration programs only increased.

In the first nine months of this year, 5,710 people, or 78.3 per cent of the 7,285 new permanent residents to the province, settled in Canada under those economic immigration programs.

Last year, immigration to the province took a beating due to the pandemic, plummeting 53.3 per cent to 7,400 new permanent residents.

Since then, though, things have picked up again despite the subsequent waves of the pandemic with 7,285 new permanent residents to the province in the first nine months of this year alone.

Employers In Hiring Mode In Saskatchewan

At that rate, Saskatchewan could welcome 9,713 new permanent residents this year.

There is little doubt that Canadian employers, including those in Saskatchewan, are generally in hiring mode.

With that latest boost in jobs, Canada now has more people working than it did in February 2020, before the start of the pandemic in Canada.

In their latest provincial outlook, the TD Economics economists noted the severe drought this summer hurt Saskatchewan farmers but that many other sectors are doing well.

“Outside of agriculture, the near-term outlook is brighter as previously-lagging commodity industries are now starting to show signs of life,” they wrote. “Potash production and prices are up this year and are expected to continue showing resilience on the back of robust global food demand.

“Longer term, the outlook was boosted by the recent approval of the Jansen mine project. Energy investment remains subdued, but oil production has started rebounding. A solid pricing environment and robust demand south of the border will be supportive for incomes and government coffers.”

Labour shortages are now rampant throughout Saskatchewan, forcing the provincial government to put in a new pathway to immigration earlier this year to address the paucity of people.

Under its Saskatchewan Immigrant Nominee Program (SINP), the province launched its Hard-To-Fill Skills Pilot in late November to allow employers to recruit workers through overseas missions, or other international recruitment activities, into select jobs that have significant recruitment challenges.

The pilot allows applications even for low and entry-level positions that may require on-the-job training but are critical for businesses to continue to operate.

The sectors deemed to be facing the biggest labour shortages at the time of the announcement were health, manufacturing, agriculture, ag-tech, construction, hospitality and retail.

“The demand for labour in our province is strong, and it’s only going to increase with the significant economic projects recently announced in Saskatchewan,” said provincial Immigration Minister Jeremy Harrison.

“This new Hard-To-Fill Skills Pilot – developed in Saskatchewan for Saskatchewan – is progress on our autonomy discussions with the federal government and is going to help provide employers with greater access to international options to recruit workers,” he said.

“This is in addition to record investments into training and upskilling our provincial workforce, as we enter a period of strong growth coming out of the global pandemic.”

Applicants to the Hard-To-Fill Skills Pilot must:

The province’s overall immigration scheme, its SINP, consists of three main categories that are each divided into several sub-categories for different types of immigration candidates.

The main categories are:

The Occupation-In-Demand sub-category is for skilled workers who do not have a job offer but are highly skilled in a Saskatchewan in-demand occupation.

Those who do have job offers in skilled occupations in the province can apply under the Employment Offer Sub-Category.

Under the Saskatchewan Experience category, there are six sub-categories:

The Skilled Worker With Existing Work Permit sub-category is for skilled workers who have been working in Saskatchewan for at least six months with a valid work permit.

The Semi-Skilled Agriculture Worker With Existing Work Permit sub-category is similar. It’s for semi-skilled agriculture workers who have been working in Saskatchewan for at least six months with a valid work permit.

Physicians, nurses and other healthcare workers can apply for permanent residency in Saskatchewan under the Health Professional sub-category if they have already been working in the province on a temporary work permit for at least six months.

Foreign Nationals In Hospitality Sector Have Pathway To Permanent Residence

The Hospitality Sector pilot project sub-category is foreign nationals currently working in Saskatchewan for more than six months in one these three occupations:

Long-haul truckers working in Canada on a temporary work permit may transition to a permanent status under their own sub-category.

Under the Saskatchewan Student Stream sub-category, international students who have graduated from a Canadian or Saskatchewan post-secondary institution can apply for permanent residency under two streams:

The Saskatchewan Entrepreneur Stream allows candidates with a minimum net worth of $500,000 and their families to start, obtain or partner in a business in the province by investing at least $300,000. They then have to be actively involved in managing the business and live in Saskatchewan.

Under the International Graduate Entrepreneur stream, international students graduating from eligible Saskatchewan educational institutions can stay in the province as entrepreneurs, while also attracting business investment.

The Farm Owners/Operators stream is aimed at those with farming experience and a net worth of at least $500,000 who want to buy and operate a farm in the province.

The Young Farmer stream swaps out some of that need for as high net worth in exchange for more experience in the industry.

Under this stream, applicants can have a minimum net worth of only $300,000 but must have at least three years of experience in farm ownership, management or practical farming.

Farmland in southwestern Saskatchewan costs between $900 to $3,200 an acre, with an average price of about $2,000 per acre but prices in the province’s northwest, northeast, and west-central regions are pricier, in some cases fetching as much as  $4,500 per acre.