Ontario once again attracted the lion’s share of new permanent residents to Canada in 2021 with more newcomers settling there than in six other provinces put together.

As the year drew to a close, newly-minted Immigration Minister Sean Fraser announced Canada had hit its ambitious immigration target of 401,000 new permanent residents for 2021.

The country is now preparing to welcome even more immigrants in 2022 with Ottawa setting an immigration target of 411,000 for the coming year.

The provincial government in Ontario seems firmly committed to drawing on those newcomers to help rebuild its economy in what will hopefully soon be a post-COVID-19 reality.

Even the country struggled with record-breaking COVID-19 case counts due to the arrival of the Omicron variant in December, Ontario announced it would be trying to attract even more entrepreneurs to the province.

The province is recruiting 100 international entrepreneurs over the next two years to start or grow businesses in regions outside of the Greater Toronto Area that have been hit hard by pandemic job losses through the Entrepreneur Stream of the Ontario Immigrant Nominee Program (OINP).

Each foreign entrepreneur will be required to invest a minimum of $200,000 into their business to start or grow a business in communities hit hard by job losses resulting from COVID-19.

First established in 2015, the Entrepreneur Stream of the OINP has so far only seen two nominations but the province is pledging to better support entrepreneurs who apply and help connect them with business opportunities.

Among immigrant entrepreneurs in Ontario, the province’s latest announcement in December was strongly supported.

“I immigrated to Canada 50 years ago, and I am a proud Canadian citizen,” said Kacee Vasudeva, CEO of Maxtech Innovations. “Many years ago, with the help of the Ontario government I started one of my businesses that has grown into a successful enterprise.

“I want to congratulate the minister on announcing this new project today that will help many more international entrepreneurs start businesses like mine, create new jobs in small communities and settle in Ontario.”

In a one-time move, Canada also allowed up to 90,000 temporary residents to gain their permanent residency in Canada through a special pathway in 2021.

In Ontario, that allowed the province to welcome an additional 5,990 new permanent residents in the first 10 months of the year.

Family sponsorship programs resulted in 27,740 new permanent residents during that period and the province also welcomed 27,245 protected persons and refugees in the period that ended Oct. 31, 2021.

Ontario Moves Towards Recognition Of Foreign Credentials For Immigrants

As it looks ahead, Ontario is also trying to remove barriers to employment for internationally-trained immigrants.

In October, that province proposed legislation that would address its labour shortage by remove many significant barriers internationally-trained immigrants face, such as the requirement for Canadian work experience when attempting to get licenced in certain regulated professions and trades such as law, accounting, architecture, engineering, electrical and plumbing.

“All too often, newcomers in this province struggle to find jobs in their regulated profession for no other reason than bureaucracy and red tape,” said Labour Minister Monte McNaughton.

“These are folks who often have the training, experience, and qualifications to work in booming industries where Ontario desperately needs help but are being denied a chance to contribute. If these proposed changes are passed, Ontario would become the first province in Canada to help level the playing field in certain regulated professions so that workers coming here have the opportunity to build a better life for themselves and their loved ones, and build stronger communities for us all.”

Canadian provinces and territories attracted the following numbers of new permanent residents in the first 10 months of 2021: 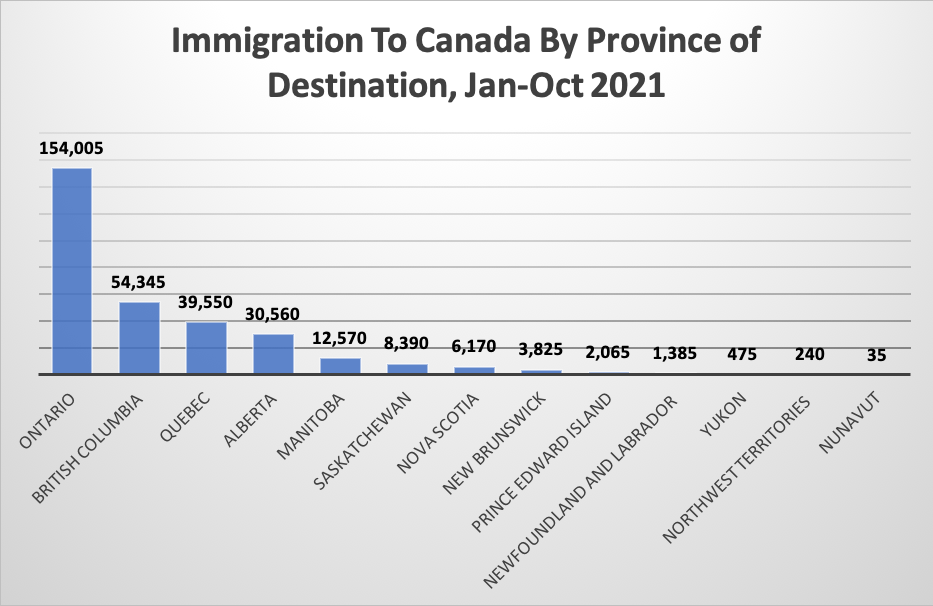