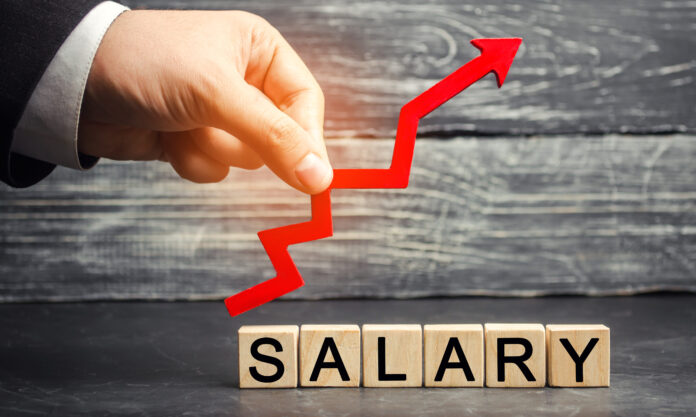 The latest report from Statistics Canada reveals employers throughout Canada are increasing wages in their attempts to attract much-needed workers as the number of job vacancies across the country remains high.

“Faced with a tight labour market and hiring difficulties, some employers respond by raising the offered wages of their vacancies,” reports Statistics Canada. “Compared with the same quarter a year earlier, the average offered hourly wage increased by 7.5 per cent to $24.20 in the third quarter.”

In its third-quarter report, the statistical and demographic services agency notes that job vacancies did soften somewhat in that quarter, dropping 3.3 per cent to 959,600 from the record high of 992,200 vacant positions in the second quarter of the year.

But the latest quarter still had a very high number of job vacancies.

The job vacancy rate, which is calculated by dividing the number of vacant positions in Canada by the total number of jobs, both filled and unfilled, was 5.4 per cent in the third quarter of this year, down a smidgeon from 5.7 per cent in the previous quarter.

That’s a very, very tight labour market. Even if every unemployed person had the right skills and experience to do the available jobs, there were still barely enough people unemployed in Canada to fill the available jobs in the country during the third quarter – and, of course, there is no such perfect match in the workforce.

“There was an average of 1.1 unemployed persons for each job vacancy in Canada in the third quarter of 2022, similar to the record low reached in the second quarter,” reports Statistics Canada.

Canadian employers trying to survive during this acute labour shortage can recruit and hire foreign nationals through the Temporary Foreign Worker Program (TFWP) and the International Mobility Program (IMP).

Candidates’ profiles are then ranked against each other according to a points-based system called the Comprehensive Ranking System (CRS). The highest-ranked candidates are considered for an Invitation to Apply (ITA) for permanent residence. Those receiving an ITA must quickly submit a full application and pay processing fees, within a delay of 90 days.

In the third quarter of this year, the big economic engines of Canada saw a drop in job vacancies but these rose in the Prairie provinces of Manitoba and Saskatchewan.

Across occupational sectors, professional, scientific and technical services saw their first decline in job vacancies in two years in the third quarter.

“Job vacancies in the professional, scientific and technical services declined 15.4 per cent from the record high reached in the second quarter to 63,100 in the third quarter,” reports Statistics Canada.

In the sector with the highest number of job vacancies, the restaurant industry, things were marginally improved for employers looking for staff in the third quarter.

“There were 140,000 job vacancies in accommodation and food services in the third quarter, down 6.5 per cent, or 9,700, from the second quarter,” reports Statistics Canada.

“As has been the case since the summer of 2021, the job vacancy rate in the accommodation and food services sector in the third quarter, at 10 per cent, was highest among all sectors, despite the decline in that quarter.”

Manufacturing also saw a drop in job vacancies, of 8.7 per cent, that quarter, the first decrease in this sector since the third quarter of 2019, the last full year before the start of the COVID-19 pandemic.

Things were little changed in the construction sector. The demand for electricians, carpenters, construction trades helpers and labourers, if anything, only grew during that latest quarter.

So too did things tighten up even more in the healthcare sector, itself already reeling from an acute shortage of nurses and physicians.

“On a quarter-over-quarter basis, job vacancies rose in the third quarter for registered nurses and registered psychiatric nurses, up 17 per cent to 27,600; nurse aides, orderlies and patient service associates, up 37.5 per cent to 26,200; and licensed practical nurses, up 20.7 per cent to 13,100,” reports Statistics Canada.

“Together, these occupations made up the majority, 69.2 per cent, of all vacancies in health occupations in the third quarter.”