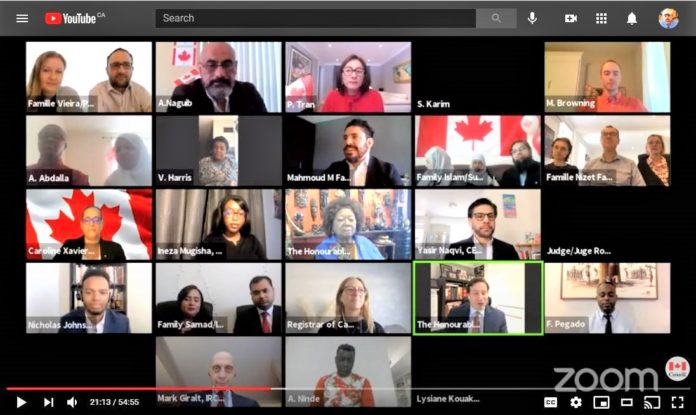 “Today, we celebrate the conclusion of one journey and the beginning of another,” said Mendicino on Friday. “Thank you for choosing Canada.

“As we write the next chapter of our collective story, we are doing it at a fortuitous moment: Black History Month. It’s a time for us to celebrate the incredible contributions of Black Canadians and to recommit ourselves to fighting racism and building a more inclusive and equitable society,” he said.

Black History Month, which is celebrated every February, was first observed in February 1996, one year after Jean Augustine, the first Black woman to become a Member of Parliament and cabinet minister, introduced it in Parliament. It was created to provide an opportunity for all Canadians to share and learn about the experiences, contributions and achievements of people of African ancestry.

Augustine, considered to be the mother of Black History Month in Canada, was on hand for the online citizenship ceremony Friday when 20 newcomers from 11 countries became Canadian citizens.

Judge Rochelle Ivri, herself a Black Canadian, presided over the ceremony and drove home the message that there are still battles to be fought to achieve true equality for Blacks, other People of Colour, and Indigenous peoples in Canada.

“Black Canadians and other people of African descent as well as Indigenous people and other racialized communities have had to face – and continue to face – social and economic barriers due to racism and discrimination,” said Ivri in French.

“This reality has been highlighted by recent events such as the protests of racial injustice this past year and the Covid-19 pandemic which has exposed differences within our society,” she continued in English. “It is our collective responsibility to listen to the voices of those affected by racism, acknowledge these inequities, and become allies in creating a just and inclusive Canada so that we can all benefit.”

During the citizenship ceremony both the immigration minister and presiding judge recognized that the land on which they were standing was the traditional Indigenous territory of the Mississaugas of the Credit and the Haudensaunee First Nation.

“As Canadians we are all living on the traditional territories of Indigenous peoples,” said Ivri. “It is necessary for all Canadians to move forward on the road to reconciliation so that we can leave a proper legacy for future generations.”

Myeengun Henry, former chief of the Chippewas of the Thames First Nation, welcomed the new Canadians to their new home.

Although Ottawa remains bullish on immigration and sees it as vital to the country’s economic recovery once the Covid-19 global pandemic has run its course, the on-going closure of the border to all but essential travel and public health measures to prevent the spread of the coronavirus are wreaking havoc with Canada’s immigration plans.

Canadian Dual Citizenship: All You Need To Know