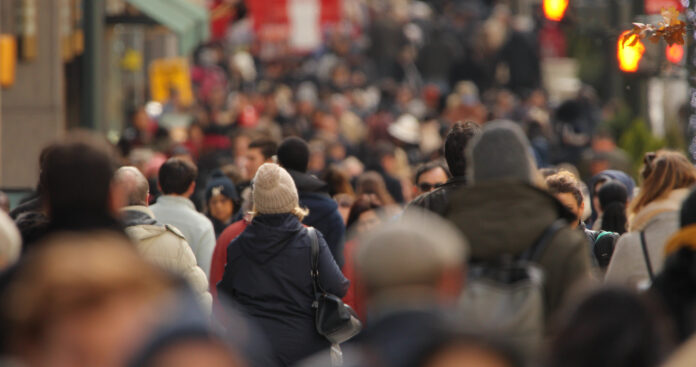 Canada immigration news: Statistics Canada has reported Canada’s population is expected to as much as almost double to 74 million by the year 2068 due to a steady flow of immigrants from across the world.

“From 38.2 million people in 2021, Canada’s population may reach between 42.9 million and 52.5 million in 2043 and between 44.9 million and 74 million in 2068, according to the various projection scenarios,” the statistical and demographic services agency reports.

Even that medium-growth strategy would mean an additional 9.6 million people in Canada by 2043, or 457,143 per year steadily for the next 21 years.

That’s roughly the current level of immigration to Canada.

Unless current trends change drastically in the coming decades, Canada’s population growth will not be coming from Canadian families having more children.

“Natural growth (births minus deaths) is expected to decrease in the coming years, namely because of an aging population and the low fertility of Canadian couples. In 2020, the number of children per woman reached a historically low level in Canada at 1.4,” reports Statistics Canada.

“This natural growth continues to decrease in Canada in the coming years in a medium-growth scenario, even becoming negative in the brief period between 2049 and 2058.”

Immigration is expected to be responsible for almost all of Canada’s population growth in the coming decades.

“If Canada’s population continues to increase in the future, it will be mainly because of immigration, which is expected to remain quite significant in the coming decades, albeit at varying levels according to the different growth scenarios,” states Statistics Canada.

In its Population Projections for Canada, Provinces and Territories, 2021 to 2068, 2022, the federal agency recognizes the average age of immigrants to Canada means this strategy of resolving labour shortages will leave the country with an on-going shortage of young people.

“Immigration is unable to significantly increase the proportion of youth in the population,” reports Statistics Canada. “This means that Canada will remain dependent on high immigration levels to renew its population, particularly in the context of a low and recently declining fertility rate.”

Depending on immigration almost exclusively to fill the available jobs and grow the population will mean the average age of Canadians will increase, under a medium-growth scenario, from 41.7 years in 2021 to 44.1 in 2043 and to 45.1 in 2068.

Canadian Population To Continue To Age

Through immigration, Canada was able to grow its population at almost twice the pace of every other G7 country from 2016 to 2021.

“While the pace of growth slowed in 2020 with the COVID-19 pandemic, it rose again in 2021 and, from January to March 2022, it was the highest of all first quarters since 1990,” reports Statistics Canada.

“Some would like to see an even greater population increase in the future to mitigate the consequences of a labour shortage affecting certain sectors of the economy. Meanwhile, others stress the impact it will have on infrastructure, particularly in Canada’s major cities, or on the availability of housing across the country.”

During the COVID-19 pandemic, many in Canada moved from one province to another and that favoured population growth in Prince Edward Island, Nova Scotia, New Brunswick, Quebec and British Columbia. But Statistics Canada does not hazard a guess in its latest forecast as to whether or not these pandemic trends will continue for the longer term and result in demographic shifts within the country.

Canada’s New Temporary to Permanent Residence Pathway: Every Document You Will...