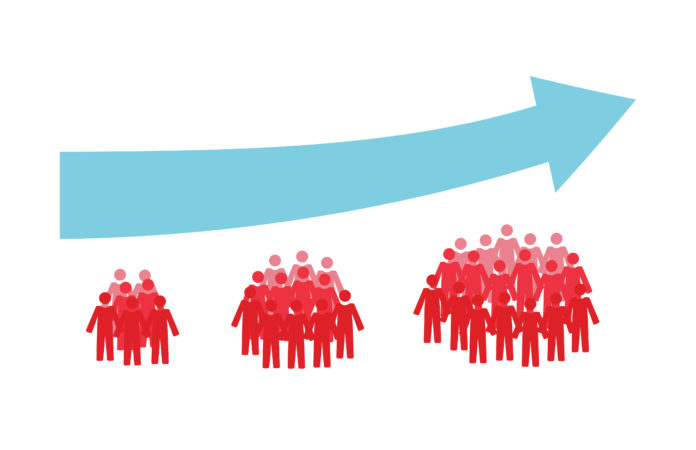 Immigration to Canada hit another higher-than-usual figure in August for the third consecutive month despite a seasonal slump.

He said earlier this year that Canada is going to hit its immigration target of 401,000 new permanent residents this year.

Seasonal Drop-in Immigration in August This Year Smaller Than Usual

It would take the equivalent of 44,710 new permanent residents for each of the next four months for Immigration, Refugees and Citizenship Canada (IRCC) to hit its goal.

Those immigration numbers Canada has not seen since the end of the last world war.

The drop in new permanent residents in August, though, is notably less than the usual, seasonal fluctuation in immigration levels.

So, the slump in immigration in August this year is only about a third of the usual seasonal fluctuation.

By comparison, only 11,370 new permanent residents came to Canada in August 2020, during the height of the Covid-19 pandemic.

Ottawa remains bullish on immigration and has raised immigration targets to bring in more than ever.

Canada Wants to Welcome 401,000 Immigrants Into the Country This Year

The federal government wants to welcome more than 1.2 million newcomers between 2021 and 2023.

“Immigration is essential to getting us through the pandemic, but also to our short-term economic recovery and our long-term economic growth,” Mendicino has said. “Canadians have seen how newcomers are playing an outsized role in our hospitals and care homes and helping us to keep food on the table.

In its bid to increase immigration, Canada has undertaken several initiatives, including opening its arms to more Afghan refugees.

Mendicino announced last week Canada will accept twice as many Afghan refugees as it had previously announced.

Ottawa Opening Its Arms to Refugees From Around the World, Especially Afghanistan

“At the UN, Canada announced we will double our humanitarian resettlement commitment from 20,000 to 40,000 Afghan refugees,” he tweeted.

“Through our efforts, we will offer a new home for Afghan refugees while upholding democracy and human rights around the world.”

Canada has also relaxed many of the restrictions for those applying for refugee status.

They no longer need to prove that they face torture or death if they are forced to return to their home countries. Refugee claimants can now seek asylum if they have been discriminated against or persecuted for being poor and old, indigenous or having unpopular political views in their home countries.

During the past year, Canada has undertaken several measures to boost immigration and bring valuable skilled workers and international students to the country by introducing a series of reforms to immigration policy and procedures.

Early this year, the IRCC gave visitors, study and work permit holders in Canada affected by the COVID-19 pandemic more time to restore their status with an extension of a temporary public policy first announced in July 2020.

That policy was later tweaked and broadened to allow visitors to do the same thing provided they had a job even if it the offer was not with the original employer.

In another measure, this one designed to minimize the impact of COVID-19 public health restrictions on the economy, Ottawa granted international students an extension in mid-February to the opportunity to complete their entire programs online from their home countries and still qualify for a Post-Graduation Work Permit (PGWP).

“With the prospect of many international students continuing online learning from abroad for several more months, temporary changes to the PGWP Program put in place earlier in the pandemic are being extended and expanded,” an IRCC statement said.

Immigrants coming to Canada under the Start-Up Visa Program to set up businesses and create jobs continued to be welcomed with open arms during the pandemic.

So too were business travellers – many of whom were foreign nationals seeking permanent residence in Canada through economic immigration programs – coming to provide critical infrastructure support, economic services, supply chains, or any other activity considered essential by Ottawa.

The IRCC also responded to the immigration challenge during the pandemic by slashing the Comprehensive Ranking System (CRS) scores in an Express Entry draw that saw more than five times as many Invitations to Apply (ITAs) issued as usual.

Ottawa then followed that by launching six new pathways to permanent residency for temporary foreign workers and international grads.

“My vision for our immigration system going forward is that it is completely virtual and touchless and that each and every one of these steps is integrated so that we become the envy of the world,” said Mendicino earlier this year.