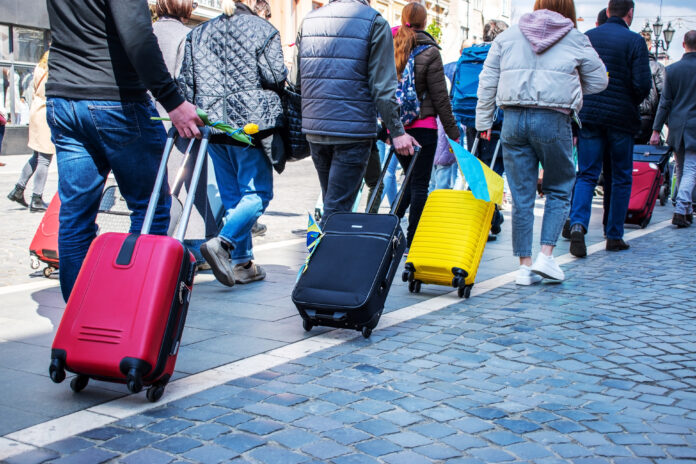 Canada immigration news: Immigration Minister Sean Fraser says three planeloads of Ukrainian refugees are going to be flown to Manitoba, Quebec, and Nova Scotia in May and June under the Canada-Ukraine Authorization for Emergency Travel (CUAET).

“Canada is doing everything it can to support Ukrainians before and after they arrive in Canada,” said Fraser.

“Millions of Ukrainians have been displaced and forced to flee their homes, and these charter flights will help make sure that those who want to come to Canada have the support they need. We’ll continue to work with provinces and territories, settlement organizations and NGOs to make sure Ukrainians feel at home in their new communities.”

The three chartered flights for people approved under the CUAET will take off from Poland. The first is scheduled to land in Winnipeg on May 23, the second in Montreal on May 29, and the third in Halifax on June 2.

Canadians Can Donate Points To Fund Flights For Ukrainians

Immigration, Refugees and Citizenship Canada (IRCC) is providing up to 14 nights of accommodations for any of these refugees who do not already have a place to stay in Canada.

Through the Ukraine2Canada Travel Fund at least 10,000 free flights are expected to be made available for refugees fleeing the Russia-Ukraine war.

That compares to only 20,010 new permanent residents who came to Canada as refugees in 2021.

The new arrivals to Canada from Ukraine are coming under temporary visas which can last up to three years and are not permanent residents.

The allegations of racism in Canada’s immigration practices, however, sound hollow because the biggest sources of new permanent residents to Canada are not primarily-Caucasian countries.

In March, Canada extended its settlement services with new programs specifically tailored for Ukrainian refugees that are being offered until the end of March next year, including:

Russian President Vladimir Putin declared war on Ukraine on Feb. 24 and quickly struck the country with a full military onslaught. The early video showed the full extent of the devastation as nothing seemed to be spared the Russian air missile attacks, not even maternity wards and civilians.

How to Apply for Canadian Permanent Residence From Ukraine