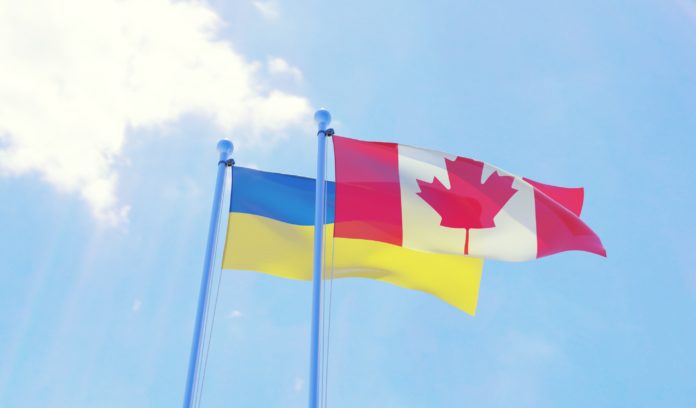 Despite COVID-19 global pandemic restricted travel, Ukraine rose in the rankings of the most important sources of new Canadian permanent residents in the first 11 months of 2020.

But during the first 11 months of 2020, Ukraine’s relative importance as a source of new permanent residents nudged upwards as immigration from Somalia, which had been ahead of it in the rankings the previous year, was particularly hard hit last year by the pandemic.

With the month of December figures still not in, the number of Somalis who became new permanent residents in Canada dropped by 72.3 per cent last year, falling to 905 from the 3,275 who had made the move the previous year.

Ukrainian immigrants are expected to have an easier time coming to Canada once the COVID-19 travel restrictions are lifted due to an agreement announced in January 2021.

The newly-created Canada-Ukraine Mobility Working Group was unveiled to identify and improve opportunities for Ukrainians hoping to come to Canada.

“Through generations of Ukrainians who have made Canada their home, the Ukrainian-Canadian community continues to make outstanding contributions to Canada’s economy, our society and our diverse cultural fabric,” said Immigration, Refugees and Citizenship Minister Marco Mendicino.

The number of Ukrainians who became permanent residents in Canada in the first 11 months of last year was off by almost 47.6 per cent, to 1,570 with the December statistics still to come.

The Eastern European nation is still below both Iraq, which provided Canada with 4,445 new permanent residents in 2019, and Egypt which provided 3,655 that same year.

Although the number of newcomers from Iraq and Egypt also dropped during the first 11 months of 2020, immigration from these two countries still remained somewhat stronger than that from Ukraine.

Gripped firmly in the second wave of the COVID-19 pandemic, Canada is only now seeing the number of new daily cases of COVID-19 start to subside. Ottawa has launched an ambitious national vaccination schedule and hopes to have the majority of Canadians inoculated by the end of September.

When that happens, immigration is likely to become more important than ever.

Even during the pandemic, Canada continued to bring in permanent residents who had qualified before the international travel restrictions were put in place and welcomed temporary foreign workers that were vital to securing the country’s food supply.

Although the pandemic did cause a major slowdown in Canada’s immigration processes, the opportunities to immigrate remain and the country is still committed to its immigration levels plan that was released shortly before COVID-19 made itself felt in Canada.

In that plan, Ottawa announced its intention to welcome more than 1.2 million new permanent residents through to the end of 2022.

Ukraine is no exception.

Prior to the spread of COVID-19 throughout the world in late 2019, Ukrainians were a steady and important source of new permanent residents to Canada, with annual figures hovering at about the 3,300 marks.

In 2020, though, the typical spring and summer bump in the number of Ukrainians becoming new permanent residents in Canada simply never materialized as the border and travel restrictions to prevent the spread of COVID-19 played havoc with immigration.

In the first quarter of last year, 600 Ukrainians become new permanent residents of Canada. The second quarter, only 320 did. There was a slight bump up in the third quarter of the year, between the first and second waves of the pandemic in Canada, but the numbers fell off again as new daily case numbers climbed at the end of the year. In the fourth quarter of 2020, only 235 Ukrainians became new permanent residents of Canada in the two months for which figures are available.

There was a drop of almost 31.7 per cent from the first quarter of the year to the third quarter, the last full quarter for which figures are complete. 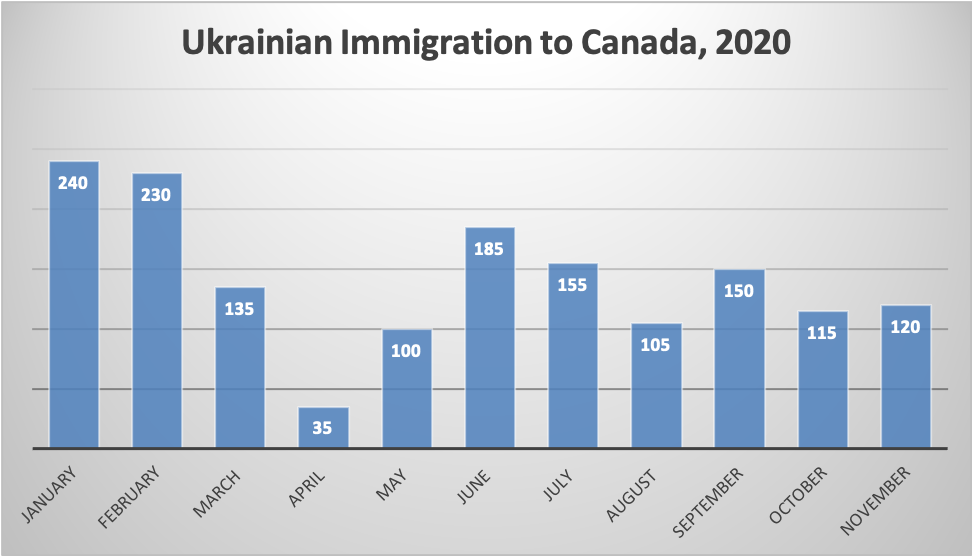 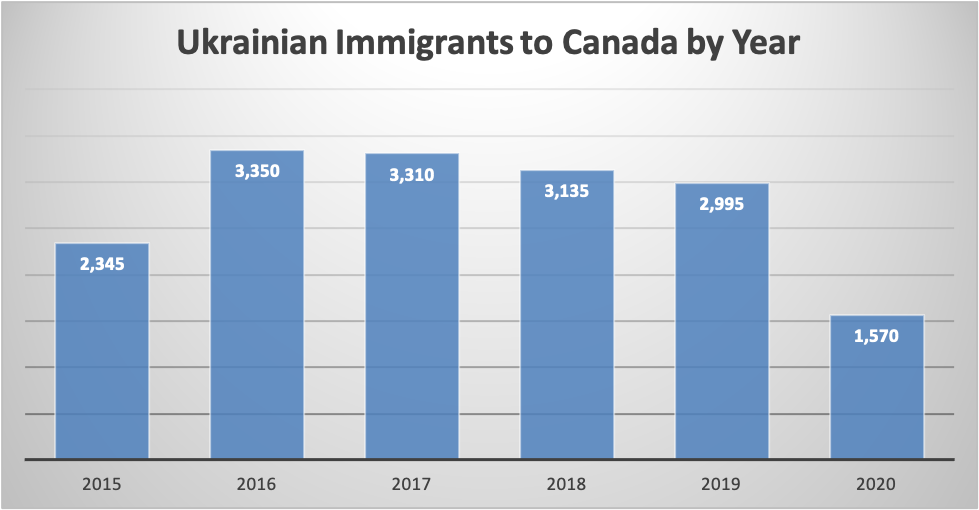 With one month of figures still to come in, Ukrainians seem to have accounted for just under one per cent of all new permanent resident arrivals to Canada in 2020.

Although that may seem like a small share of new permanent residents to Canada in 2020, it is actually more than the total of all the Irish, Spanish and Swiss who made Canada their permanent residence that year.

China was then the next-biggest source of new permanent residents to Canada, with 15,860 Chinese citizens immigrating to Canada. 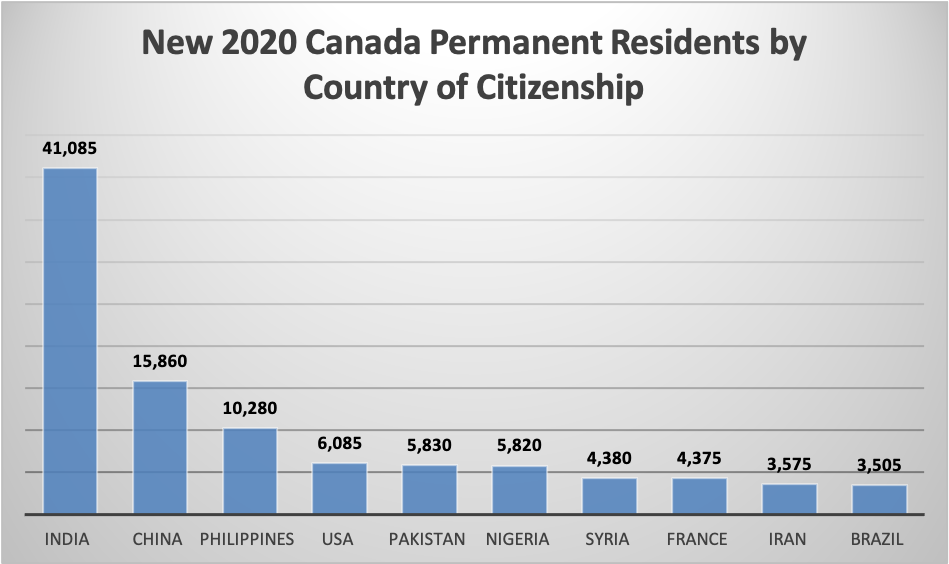 If you are looking to apply for Canada permanent residence from Ukraine, the first step is to assess which programs give you the best chance of success.

What Are The Options For Immigrating To Canada From Ukraine?

There are many immigration streams to be considered when considering applying for Canadian permanent residence from Ukraine.

If you do not qualify through a federal economic program, the next step is to consider provincial streams for your application for permanent residence from Ukraine.

Canada also aims to attract entrepreneurs and investors through its business immigration programs, with many applications accepted from Ukraine.

Several of Canada’s other provinces also operate business programs as a route to permanent residence from the Ukraine.

Candidates looking to immigrate to Canada from the Ukraine should also consider the Buy a Business and Move to Canada Program.

This is a popular route for candidates who do not immediately qualify for permanent residence when applying from the Ukraine.

Candidates in the Ukraine with family members who are already permanent residents or citizens can apply through Family Class Sponsorship immigration.

Which Family Members Can Be Sponsored For Canada Immigration From The Ukraine?