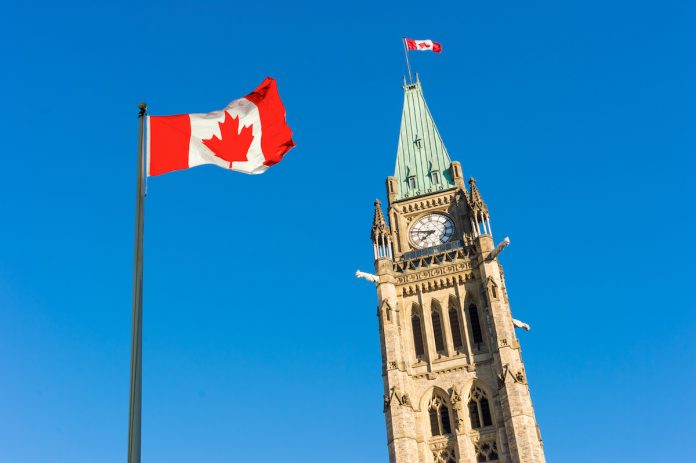 A major new survey has found that Canadians continue to buck the global trend with a positive attitude towards immigrants and immigration.

The Environics Institute poll, released on April 29, 2019, made the following discoveries:

Environics said: “Overall, Canadians’ views about immigrants and refugees have held remarkably steady since last fall, and in a few cases have become more positive.

It added: “… as has been the case most of the past two decades, positive sentiments outweigh negative ones on such questions as the overall level of immigration, its positive impact on the economy, its low impact on crime rates, and the impact on the country as a whole.”

The survey also sought to gauge how important Canadians consider immigration among the issues they face today.

With politicians trying to make the topic an important battleground ahead of the upcoming federal election, it seems Canadians do not see it as that important.

Just three per cent of Canadians consider immigration as Canada’s most important issue, in a list headed by the economy, poor government and the environment.

The survey saw the Environics Institute conduct telephone interviews with 2,000 Canadians between April 1 and April 10, 2019.

Overall, 59 per cent of Canadians disagree that there is too much immigration in Canada, up one from the when the survey was last conducted in October 2018.

Some 35 per cent, meanwhile, believe there is too much immigration.

Positive views on immigration were strongest in Atlantic Canada, British Columbia, among those aged 18 to 29 and among those with a university degree. 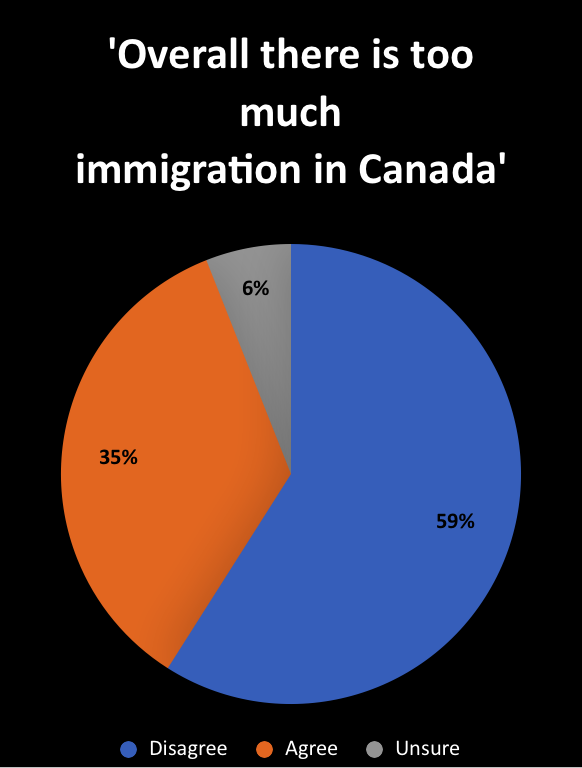 More than three quarters of respondents (77 per cent) agreed immigrant have a positive impact on the Canadian economy, up one on October 2018.

Meanwhile, 17 per cent disagreed with this statement.

Positive views were strongest in Ontario and Alberta, among younger Canadians, and those with higher levels of education and income. 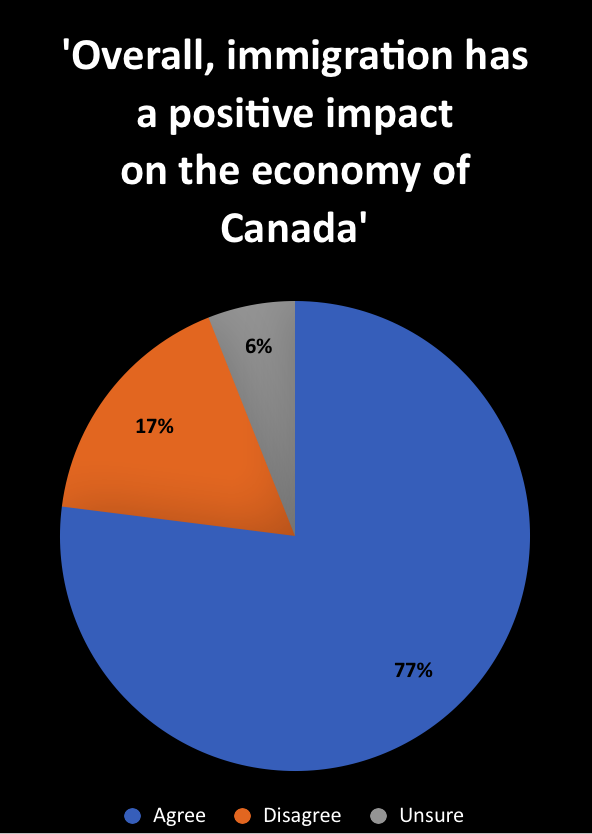 Canadians also strongly rejected the statement that immigration increases the level of crime in Canada.

Only 21 per cent agree with the statement, down five points since the survey conducted in fall 2016 and at the lowest level since 1989.

Meanwhile, 71 per cent disagreed with the statement. 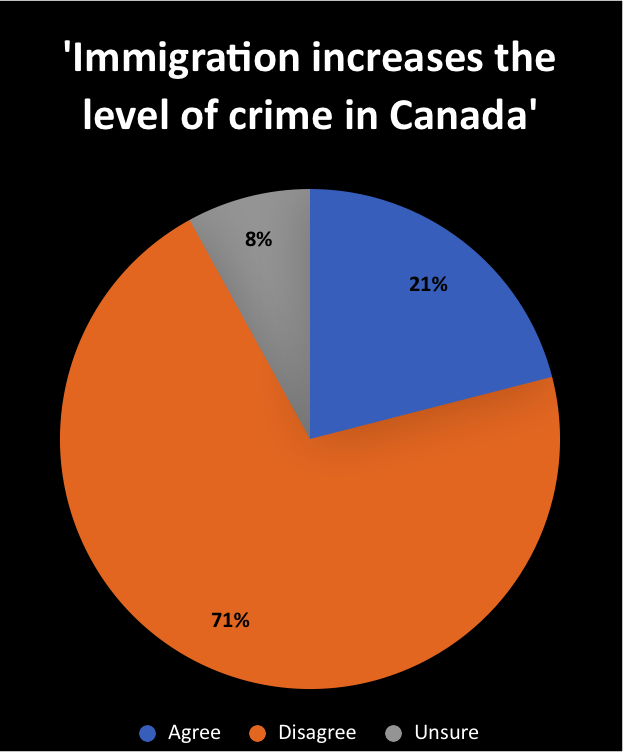 Considering the overall impact of immigrants on Canada, 44 per cent said they believed immigrants were making Canada a batter place, a result unchanged since the previous survey. 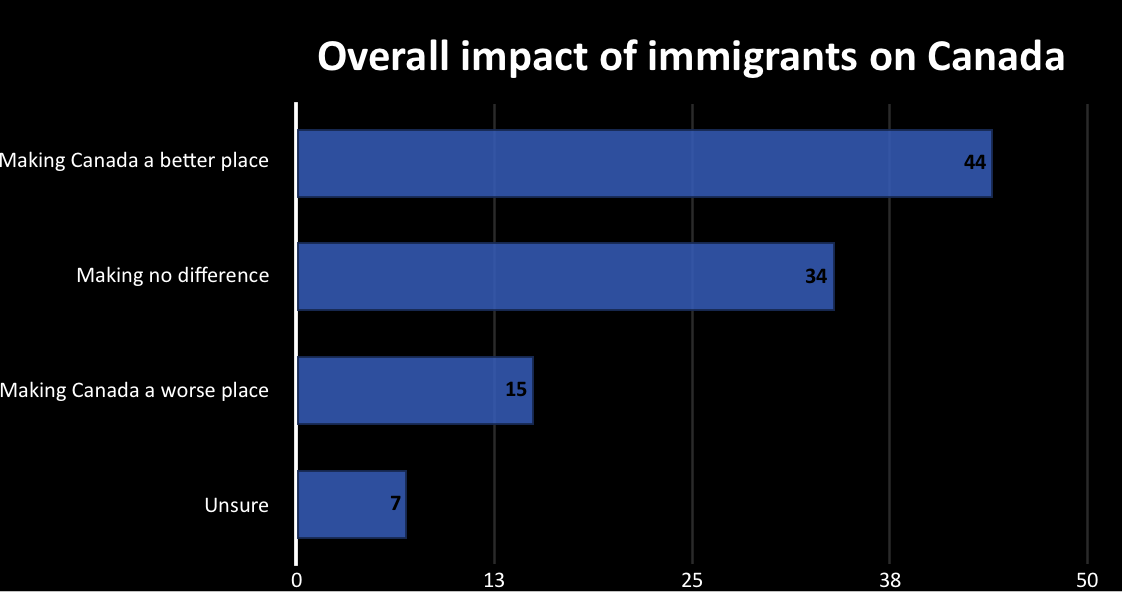 Canadians were divided on whether too many immigrants come into the country and do not adopt Canadian values.

More than half (51 per cent) agreed with this statement, down one point on the October 2018 survey.

Meanwhile, 42 per cent disagreed with the statement, an increase of one percentage point on the previous survey.

Views on the statement have remained little changed since 2016. 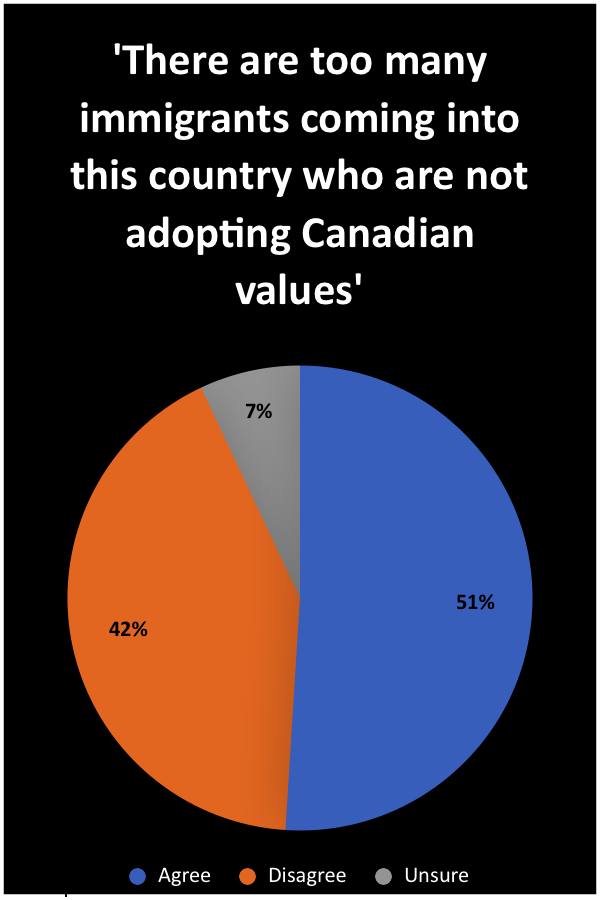