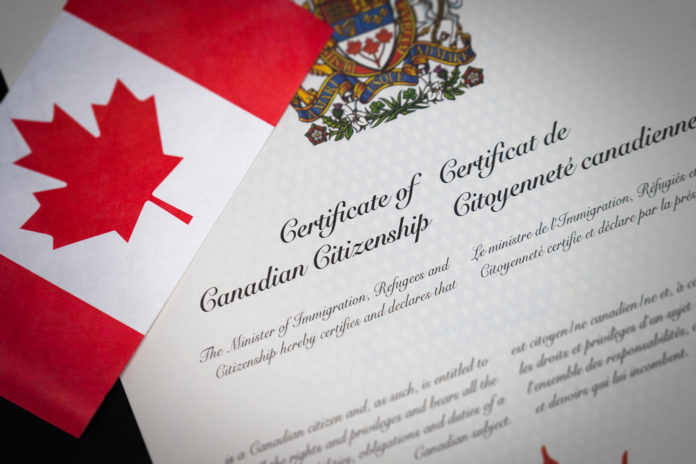 Canada immigration news: A statement of respect for Canada’s indigenous peoples is to be included in the oath all immigrants take to become Canadian citizens.

“The oath of citizenship is more than words. It’s a declaration of belonging,” tweeted Immigration Minister Marco Mendicino earlier this month.

“The oath will now recognize First Nations, Inuit and Métis rights and treaties, fulfilling (the Truth and Reconciliation Commission) call to action 94 and ensuring new Canadians understand their important role in our past and present.”

As of Thursday last week, the legislation to change the oath of citizenship, Bill C-8, An Act to Amend the Citizenship Act, had yet to receive royal assent, the final step needed to make it become the law of the land. But it had cleared the House of Commons and the Senate.

Under the current oath of citizenship, new Canadians state: “I swear (or affirm) that I will be faithful and bear true allegiance to Her Majesty Queen Elizabeth II, Queen of Canada, Her Heirs and Successors, and that I will faithfully observe the laws of Canada and fulfil my duties as a Canadian citizen.”

But the Truth and Reconciliation Commission (TRC), whose mandate was to inform Canadians about what had happened during the time the residential schools were in operation, came back with a recommendation six years ago to change the oath of citizenship.

In its six-volume final report to Canada’s federal government, the TRC made 94 recommendations after spending six years hearing more than 6,500 witnesses across the country.

Ottawa has decided to act on several of those recommendations and the change to the oath of citizenship, modified slightly from what the TRC had proposed, is one of those changes.

“It is our collective responsibility to acknowledge the legacy of residential schools and the devastating effects they have had, and continue to have, on indigenous peoples and their communities,” said Peter Schiefke, parliamentary secretary to the immigration minister, last week.

“As Canadians, we must commit to understanding the atrocities of residential schools and what we can do to address their legacy, and continue to move towards reconciliation with indigenous peoples in Canada.

According to the immigration ministry’s parliamentary secretary, Bill C-8 was needed  to help new Canadians at the culmination of their journey to citizenship understand the fundamental, historical truths of their new country, beginning not with Confederation, but with the presence of first nations, Inuit and Métis peoples.

The oath is to be changed to: “I swear (or affirm) that I will be faithful and bear true allegiance to Her Majesty Queen Elizabeth II, Queen of Canada, Her Heirs and Successors, and that I will faithfully observe the laws of Canada including Treaties with Indigenous Peoples, and fulfill my duties as a Canadian citizen.”

As the legislation to change the oath of citizenship worked its way through the Senate earlier this month, several Canadian senators took the opportunity to address the need to do more to address the perceived racism towards Canada’s First Nations.

Independent Senator Ratna Omidvar was among them.

She called on Ottawa to not only change the oath but also to make needed amendments to a guide issued by Immigration, Refugees and Citizenship Canada (IRCC) to new Canadians.

“It is not enough to simply amend the oath in the Citizenship Act,” said the senator. “For this amendment to make any meaningful and substantive difference in our community there needs to be a commitment to amend the ‘Discover Canada – Canada’s History’ study guide.

“The study guide as it reads now is wholly inadequate to acknowledge the history and continued atrocities faced by indigenous peoples, and specifically indigenous women, girls and gender-diverse peoples.”

The booklet, given to immigrants seeking citizenship in Canada and one of the key tools to prepare them for the citizenship test, was last updated in 2012.  It is currently undergoing revisions and updates to support the recommendations of the TRC.

“They have worked with national indigenous organizations to develop content for the guide that will help new Canadians understand changes in the oath or affirmation that reflect the aboriginal and treaty rights of First Nations, Inuit and Métis peoples.”

Canadian Dual Citizenship: All You Need To Know