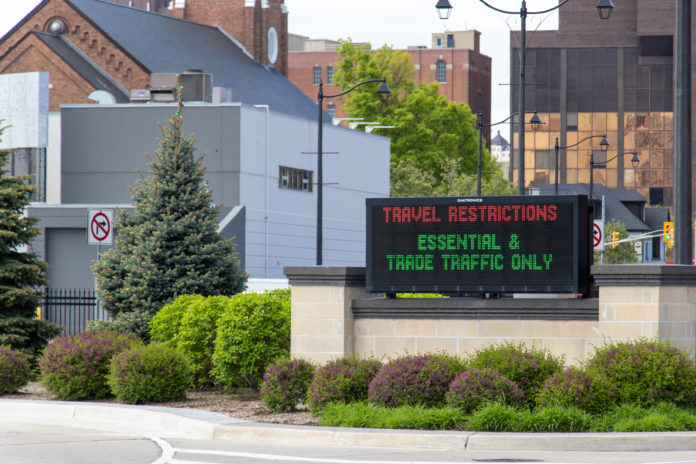 An Angus Reid poll says Canadians want their border with the United States to stay closed despite calls from Americans to re-open it and the United States’ faster pace of vaccination against COVID-19.

“We’re all eager to be able to travel again,” Prime Minister Justin Trudeau said recently. “But I think we’re all going to wait patiently until such time as the health situation allows us to loosen border restrictions internationally. That’ll be eventually, but not for today.”

The Canada-U.S. border has been shut for more than a year, with the closure recently extended until May 21. Since Feb. 21, travellers who fly into Canada are required to stay in government-approved quarantine hotels for three nights at their own expense to await the results of COVID-19 tests administered upon their landing.

Once they receive those results, those travellers still have to continue to complete two weeks of self-isolation at home.

Restrictions on international travel from the United States and other countries have slowed the flow of immigration to Canada to a trickle.

But Canada’s testing of travellers at the border has also helped spot many cases of COVID-19 and quarantine those people from the Canadian public, likely curbing the spread of the illness. Since the policy was implemented, 1.3 per cent of the 176,000 travellers have tested positive for COVID-19 upon their arrival.

It’s a controversial policy that has made headlines as inconvenienced travellers have often complained about the delays and cost of the measures.

International students, too, have sometimes been hard-hit by the policy. Denise Amyot, president and CEO of Colleges and Institutes Canada, has said international students in smaller colleges and universities in remote or rural areas of Canada are particularly impacted because they often have to quarantine twice. The cost of staying in a hotel for three days upon arrival is also cost-prohibitive to them, she said.

“This is very costly, especially for an international student,” said the top exec for the organization representing colleges and universities in Canada.

Most Canadians, though, support both the 14-day self-isolation period as necessary, with 80 per cent of respondents to the Angus Reid poll supporting the measure. A slimmer majority, 58 per cent, support the mandatory three-day hotel stay in government-approved hotels upon arrival.

The country’s border with its southern neighbour should only be opened this autumn say a quarter of Canadians and almost a third, 31 per cent, say it should only open at the end of the year.

Throughout the pandemic, the Canadian government has remained fully committed to immigration.

Late last year, Immigration Minister Marco Mendicino announced Canada was going to greatly increase immigration levels for the next three years to make up for the shortfall in 2020 due to the pandemic.