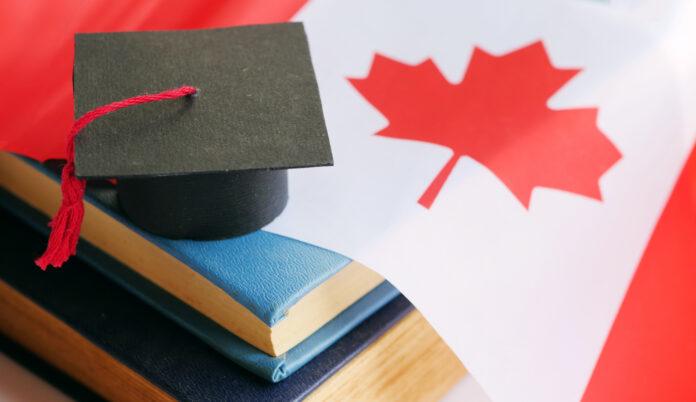 The report also says Ottawa should set three-year targets for the number of international students needed to fill jobs going begging for workers in Canada.

“Provinces should (also) develop a 10-year funding framework for post-secondary institutions that allows them to focus on a market-sensitive education structure that is attractive to, but not overly dependent on, international students,” write RBC Economics & Thought Leadership research associate Ben Richardson and managing editor Yadullah Hussain.

“Expand the share of immigrants with Canadian study experience within the economic immigrant class with special emphasis on STEM, healthcare, and in trades that are vital for energy transition.”

In their report, Course Correction: How International Students Can Help Solve Canada’s Labour Crisis released this week, the authors make the case that international students are a pillar of Canada’s immigration strategy, comprising 17 per cent of all new permanent residents annually and 40 per cent of immigrants who arrive under economic immigration programs.

“International students are twice as likely as domestic students to study engineering and more than 2.5 times as likely to study math and computer sciences, two top areas of projected labour shortages,” note the authors.

The snag in the Canadian immigration system, though, is these international students often face hurdles in immigrating to Canada.

“Labour market misalignment and a perplexing immigration system could diminish our ability to keep international talent. Foreign students are under-represented in healthcare and trades, and few are able to acquire the same level of early work experience as domestic students,” note the authors.

Even as Canadian universities and colleges try to recruit international students to come to Canada, other countries are vying for them as well.

In its bid to attract and retain these international students, Canada needs to up its game, the authors argue.

Canada In Fierce Battle With Other Countries To Woo International Students

“There’s a global war for talent,” claim Richardson and Hussain. “Canada’s peers are sharpening their policies.

“The U.S. remains a magnet for international students given its Ivy League universities and job opportunities. Proposed changes to U.S. immigration laws also make it easier for STEM students to enter and stay in the country.

“The UK has launched a campaign to attract high-calibre international students. Australia also rolled out a 10-year strategy in 2021 to better align its international educational offering with employment opportunities and diversification of source countries.

“Across the world, skills in areas as diverse as STEM, healthcare, education, green jobs and advanced manufacturing are being prized more than ever before and India, China, Malaysia and Singapore are among the growing pool of countries looking to attract, educate and retain knowledge workers.”

Although Canada is recognized as a world leader in pathways for immigration for international students seeking permanent residency, hiccups remain with some programs not being accessible to all students.

The Post-Graduation Work Permit (PGWP) makes it easier for international students to gain work experience in Canada and start working without waiting for the processing of permanent residence applications.

More than 157,000 former international students became new permanent residents in 2021 with more than 88,000 transitioning directly from a PGWP.

According to an RBC survey of international students, 39 per cent had already applied for a PGWP and another 55 per cent said they intend to apply for one.

“But the PGWP does not apply to everyone,” notes the report. “Students in many private college programs are not eligible. It is also time-limited depending on the length of study. To gain enough points for permanent residency, a student would have to string together any number and combinations of study and work permits.”

Thousands of international students find themselves lost in what they often perceive as a labyrinth of programs and requirements, trying desperately to balance work and study permits and extensions.

Some students use immigration lawyers or advisors. Colleges and universities also often offer services to help bridge some of these gaps but there are capacity limitations.

“We need a ‘Team Canada’ approach to marketing the country as an education destination, not just in terms of dollars, but in engaging with Canadian enterprises and civil society organizations that have deep roots in countries and regions we’re targeting,” Universities Canada president Paul Davidson is quoted as saying in the report.

Although constant improvements to pathways to immigration are a good thing, staying on top of those programs and trying to navigate them can be very, very challenging, says Bezo.

In their report, Richardson and Hussain acknowledge the tremendous advantages of the PGWP in helping international students to gain their permanent residency but they also note more needs to be done to align the recruitment of these students with Canada’s labour market needs.

“Canada’s 10-year conversion rate of international students to permanent residents is 33 per cent, based on the cohort that started in 2010,” they write.

“For the PGWP, the comparative rate is 73 per cent. The increased use of the PGWP since 2008 should increase Canada’s overall retention rate as more recent 10-year stats become available. But a key question is whether Canada is doing enough to recruit and retain international students that align with our labour market needs.”