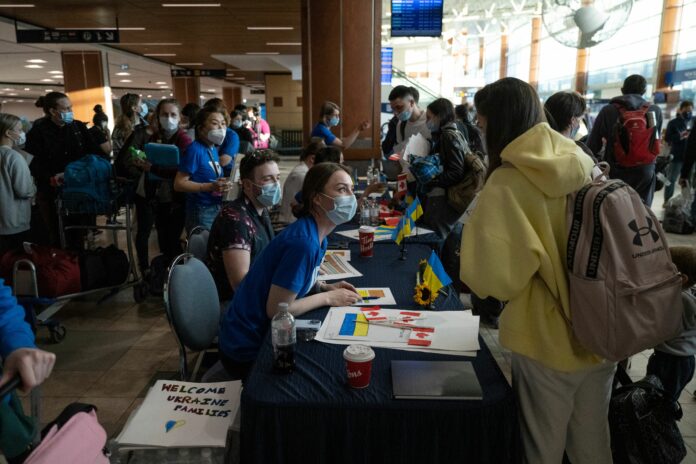 “We will continue to work closely with our partners to ensure Ukrainians have the support they need to find safe haven in Canada and thrive in their new communities.”

That third planeload brings the total number of Ukrainians fleeing their war-torn homeland on these flights chartered by the Canadian government to 953.

The first chartered flight brought 328 Ukrainians to Winnipeg, Manitoba, on May 23 and the second brought 306 people to Montreal, Quebec on May 29.

Canadians Opening Their Hearts And Homes To Ukrainian Refugees

Everywhere these Ukrainian refugees have landed in Canada, they have been met with open arms.

The day before the latest flight landed in Halifax, the daily newspaper there, The Chronicle Herald, ran a story proclaiming in big, bold letters: “Nova Scotians welcome Ukrainians”.

In Atlantic Canada, which includes Nova Scotia, New Brunswick, Prince Edward Island and Newfoundland and Labrador, a retired bookkeeper, Carol Ailles, has set up a Facebook group called Atlantic Canada Hosts for Ukrainians to put these refugees in touch with host families.

By Sunday, June 5, that group had grown to 9,200 members. Through it, more than 1,000 spaces have been made available for Ukrainians and 700 Ukrainians have signed up, reported The Chronicle Herald.

Bikes, toys, kitchenware, desks, chairs, sofas, dining sets, car seats, clothing and more have already been donated to help out these Ukrainian refugees, notes Rick Langille, one of the moderators of that Facebook group.

Ukrainian refugees need that help because their journey to safety has strained not only their psyche but also their pocketbooks.

“We need to get them here while they still have any resources left. Get them to a safe place, to stop and think and recover a bit. They are under a lot of stress.”

Ottawa has vowed to accept an unlimited number of Ukrainian refugees through the Canada-Ukraine Authorization for Emergency Travel (CUAET) program.

It was established on March 17 to help Ukrainians forced to flee after Russia launched its invasion of Ukraine on Feb. 24 and provides them and their immediate family members with temporary residency in Canada for up to three years.

Under CUAET, these refugees are eligible for free open work permits and study permits and so can take a job with almost any Canadian employer or enrol in any educational program in Canada.

They are also eligible for a one-time payout under the Canada-Ukraine Transitional Assistance Initiative (CUTAI) of $3,000 per adult and $1,500 per child as well as settlement services, including language training, and information about life in Canada, and help in finding jobs.

Parents and guardians can access this financial support by submitting one application for themselves, a spouse, and dependants. Payments will be made through direct deposit, so applicants will need to have a bank account with a Canadian financial institution under the same name as the name of the adult’s temporary resident status document, that is, their work permit, study permit, temporary resident permit or visitor record.

Those arriving on the three charter flights that don’t have a place to live are being put up in a hotel for two weeks.

“As Canada welcomes individuals seeking safe haven from the war in Ukraine, the government of Canada stands ready to support them and provide them with the resources to take care of themselves and their families,” said Karina Gould, Canada’s minister of families, children and social development.

“Service Canada will help ensure that services are delivered in a secure and timely way.”

As of Wednesday May 25, Immigration, Refugees and Citizenship Canada (IRCC) had already received more than 259,000 applications under the program and approved 120,600 of them. So far this year, 35,455 Ukrainians have arrived in Canada, including returning Canadian permanent residents of Ukrainian origin who still hold Ukrainian passports.

Ottawa’s charter flights build on other initiatives to bring the refugees to Canada, including the Ukraine2Canada Travel Fund through which at least 10,000 free flights are expected to be made available for refugees during the Russia-Ukraine war.

Canada Aims To Bring Thousands of Afghanistan Refugees To Safety From...