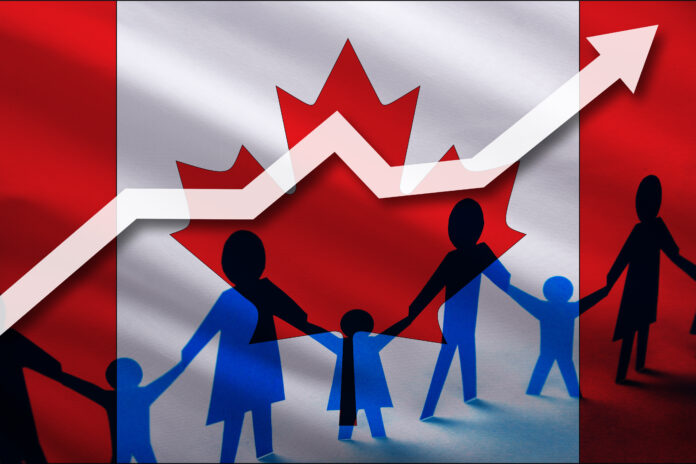 Statistics Canada says immigrants pushed Canada’s population up by almost a full percentage point in the third quarter of this year, the fastest quarterly growth in 65 years.

“This was the highest quarterly population growth rate since the second quarter of 1957 when the population grew by 1.2 per cent,” reports Statistics Canada.

“At the time, Canada’s population was 16.7 million people and it increased by 198,000 people. This rapid population growth was related to the high number of births during the post-war baby boom and the high immigration of refugees following the Hungarian Revolution in 1956.”

After more than six decades, immigration is still largely responsible for the most impressive population growth in Canada.

“Canada’s total population growth for the first nine months of 2022 was 776,217 people and has already surpassed the total growth for any full-year period since Confederation in 1867,” notes Statistics Canada.

“This high level of growth was mostly, 94 per cent, due to international migration which added 340,666 people … pushed Canada’s population over 39 million for the first time.”

In its 2023-2025 Immigration Levels Plan, the federal government targets record immigration to Canada each year through 2025.

Temporary Residents To Canada Are The Main Driver Of Population Growth

But all of those new permanent residents are not the main driver of Canada’s population growth.

“This increase was driven by work permit holders, but all types of non-permanent residents increased, and Canada continued welcoming people fleeing the Russian invasion of Ukraine. All provinces and territories saw an increase in the number of non-permanent residents, with Ontario, up 106,459, British Columbia, up 39,429, and Quebec, up 34,299, accounting for 80 per cent of the increase.”

Earlier this year, the statistical and demographic services agency forecast that immigrants are likely to comprise more than a third of Canada’s population within the next 19 years because they are responsible for almost all population growth in the country.

“Given that the population of Canada continues to age and fertility is below the population replacement level, today immigration is the main driver of population growth,” noted Statistics Canada on Wednesday.

“If these trends continue, based on Statistics Canada’s recent population projections, immigrants could represent from 29.1 per cent to 34 per cent of the population of Canada by 2041.”

A Third Of All Canadians Will Be Immigrants In 19 Years, Predicts Statistics Canada

That’s more than one in three Canadians.

And the arrival of all of those immigrants will significantly alter the demographic composition of the country, explained Statistics Canada.

“Immigrants come from many different countries, bringing with them their cultural, ethnic, linguistic and religious heritage,” noted the agency in its latest Daily report.

“Over time, Asia has become the top source region of new immigrants, and this trend continued in 2021. The share of new immigrants from Africa also increased. Together, immigrants, Indigenous people – who have walked this land for thousands of years, before Europeans settled here – and their descendants have helped shape Canada as it is known today.”

According to Statistics Canada, more than 8.3 million people, or almost one-quarter, exactly 23 per cent, of the Canadian population, were, or had ever been, landed immigrants or permanent residents in Canada.

“This was the largest proportion since Confederation, topping the previous 1921 record of 22.3 per cent, and the highest among the G7,” noted Statistics Canada.