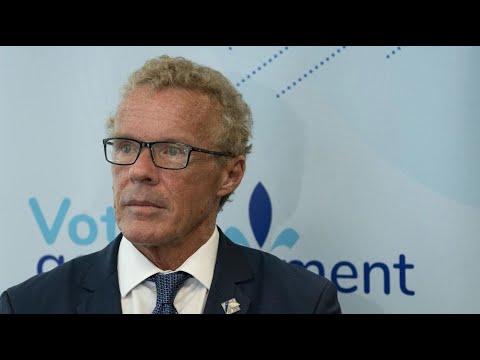 Boulet will combine the immigration role with his duties as Quebec’s labour minister.

Premier Francois Legault made the announcement on Wednesday, November 24, with Boulet saying his duties as labour minister were closely connected to immigration.

Reacting to his new role on Twitter, Boulet thanked Legault and said his thoughts were with Girault.

“Immigration must meet the needs of our economy. By focusing more on francisation, all of Quebec comes out on top!” he tweeted, in French.

Boulet said he was already due to meet federal Immigration Minister Sean Fraser over processing delays.

“The delays in admission for people who are here, who have a Quebec selection certificate, who speak French, who work in Quebec, are unacceptable,” he said.

“Ottawa has to not only recognize this, but ensure it has an action plan in place to resolve this as quickly as possible.”

Boulet has been looking after the immigration file for some time already, having announced Quebec’s 2022 Immigration Levels Plan in the National Assembly in late October.

Quebec will welcome up to 70,500 new immigrants in 2022, including 52,500 newcomers under the previously announced plan, and 18,000 intended to make up the deficit of newcomers registered during the COVID-19 pandemic.

The rebalancing figure is high because Quebec immigration is forecasting that it will fail to reach its 2021 immigration target.

Last year, the Ministry of Immigration, Francisation and Integration (MIFI) planned to welcome up to 54,500 newcomers, including 7,000 to help make up the shortfall seen in 2020, at the height of the pandemic.

But projections suggest Quebec will only welcome a maximum of 47,100 newcomers this year, a number that could drop as low as 43,100.

“Our government is resolutely committed to ensuring that immigration contributes to a strong recovery of the Quebec economy, to the vitality of the French language and of our regions,” Boulet said at the time.

“This responsible immigration plan, which includes the necessary catch-up to mitigate the effects of the pandemic on admissions, is accompanied by all the measures that we have put in place for the francisation and integration of immigrants.

“For immigration to help meet the current challenges of labour shortages, it is imperative that permanent residences be issued more quickly by the federal government.”

The economic category will continue to be the dominant one for Quebec immigration, likely contributing up to 46,600 in 2022, or 66 per cent of the total (including rebalancing). Quebec is set to welcome up to 27,800 economic immigrants in 2021.

Girault became immigration minister in June 2020, taking over from Simon Jolin-Barrette. It is not known if she will return to the role when her health improves.